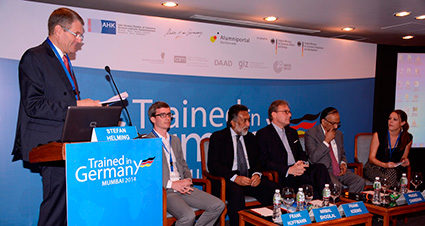 Panel Discussion at the Trained in Germany Mumbai 2014

The “Trained in Germany” job fair will remain a memorable one for not only all the participants who attended it but also the organizers, i.e.  Deutsche Gesellschaft fuer Internationale Zusammenarbeit (GIZ) and the Indo-German Chamber of Commerce, who managed to put such an event together at the elite Trident Hotel in Mumbai.

Only a privileged few had access to the high-profile event, which saw the participation of 20+ German Companies, ranging from Siemens, Bayer, Mercedes-Benz, BASF, Bosch, Deutsche Bank to name just a few.  GIZ, Alumniportal Deutschland, Make-it-in-Germany, DAAD and the Goethe Institut represented the cultural, educational and social aspects of Germany and facilitated the exhibitors with information regarding life in Germany. These organizations highlighted Germany’s world class and affordable vocational education and training system, which created a buzz of interest amongst the participants.

The job fair received an amazing response from enthusiasts who had arrived at the venue from across India to explore their career opportunities with the German giants participating in this grand “matchmaking” affair, as quoted by the IGCC Director-General, Mr. Bernhard Steinruecke.

The company presentations also managed to capture the essence of Deutschland and its disciplined professional culture. The participating companies encouraged exhibitors to be more practical oriented and to think of life beyond a degree education. What they are looking for are not just engineers or researchers or mathematicians or managers. They need the youth that can think logically, have a rational approach towards life and communicate effectively.

Truly the matchmaking affair was a highly successful one, and such a platform was welcomed by the exhibitors as well as the participants as it helps to select the best possible employee at the right place and the right time. Kudos to the Indo German Chamber of Commerce (IGCC) for organizing and managing the job fair so efficiently!