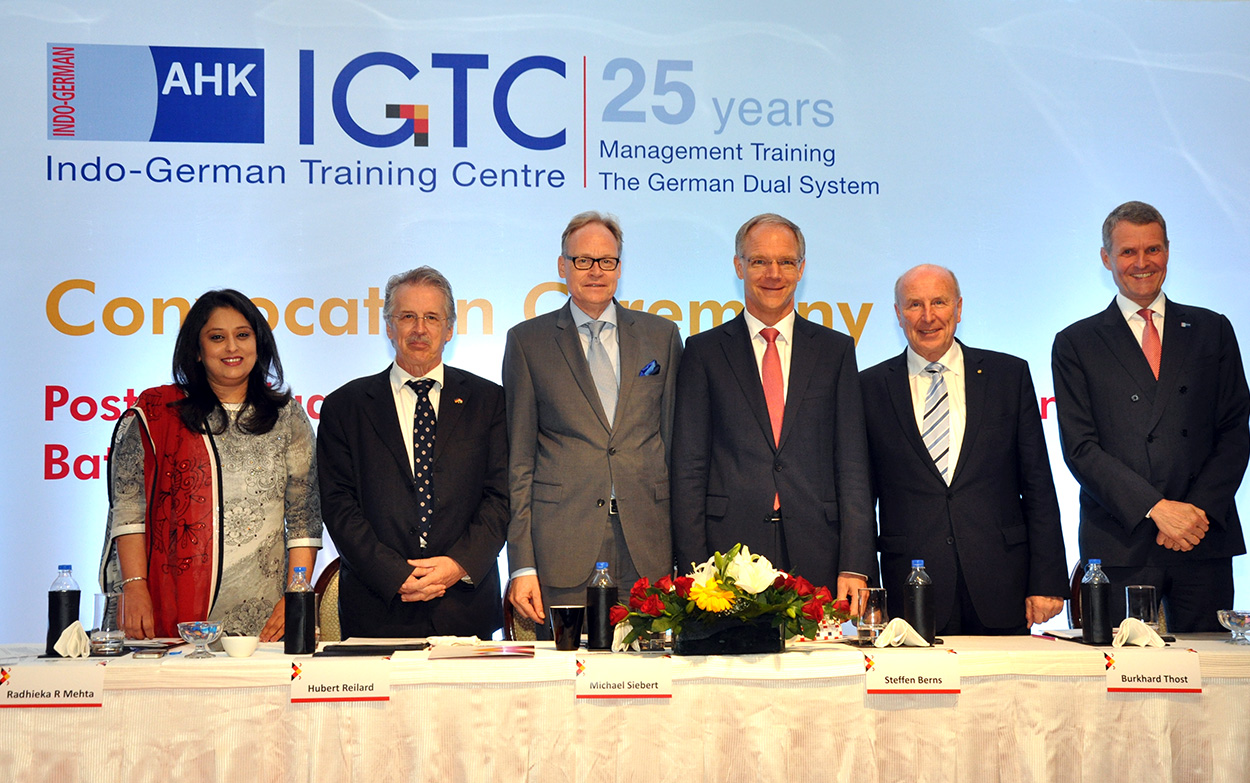 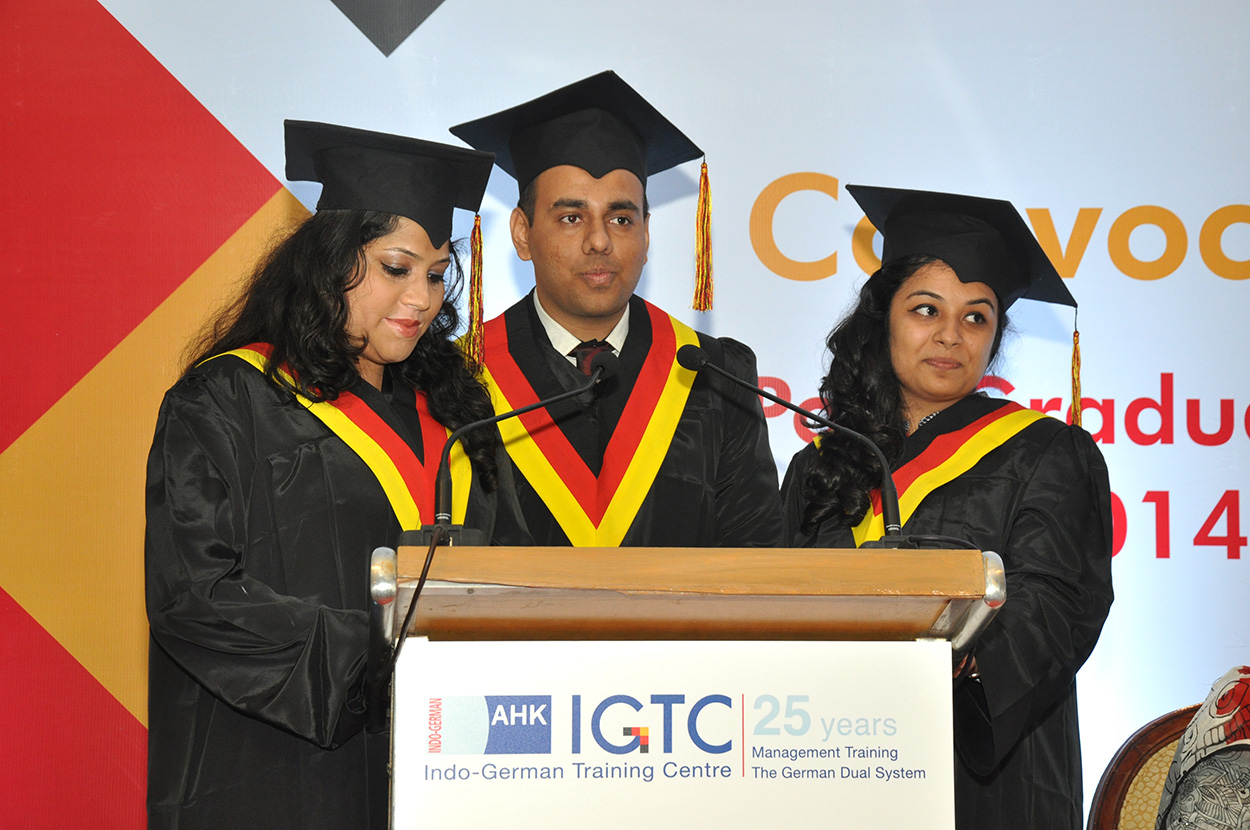 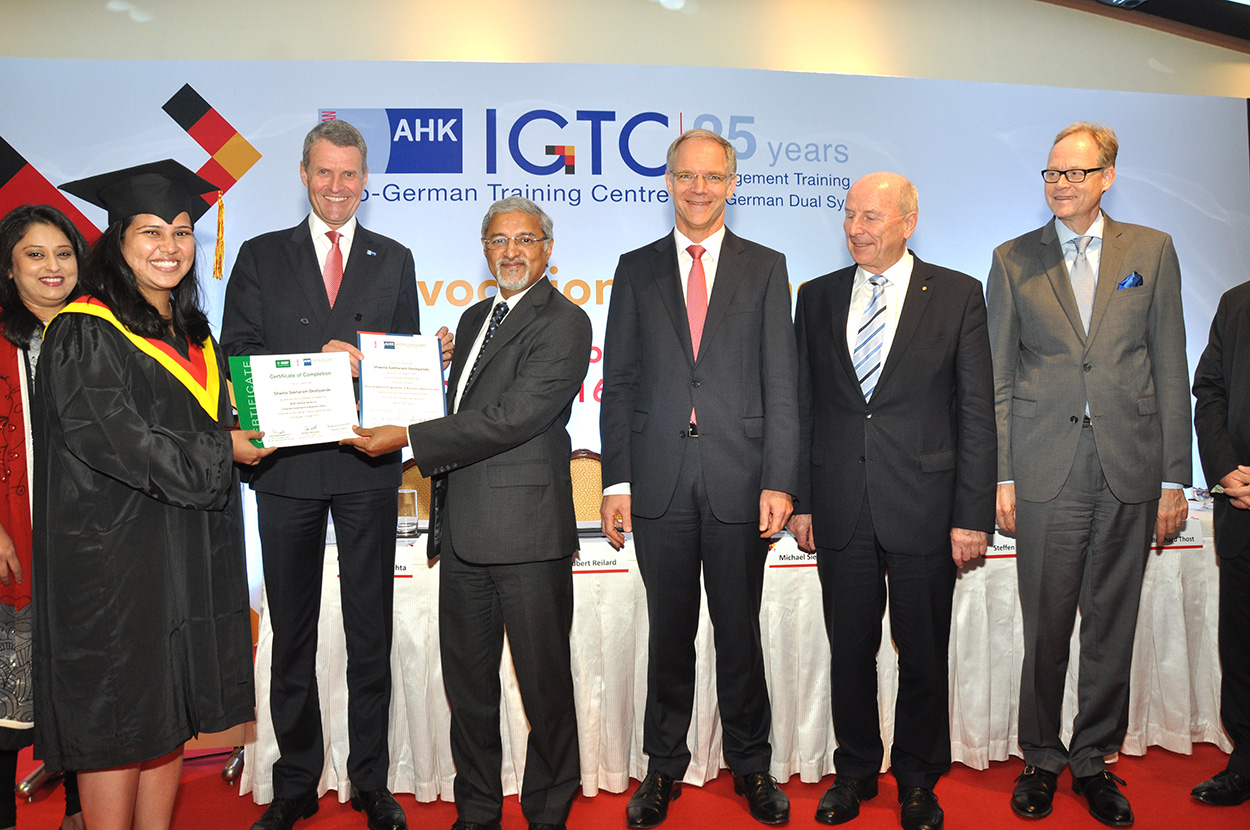 Shweta Deshpande receiving award from Chairman of BASF,Dr.Raman Ramachandran for excelling in the BASF Seminar Series course on Corporate Governance and Business Ethics 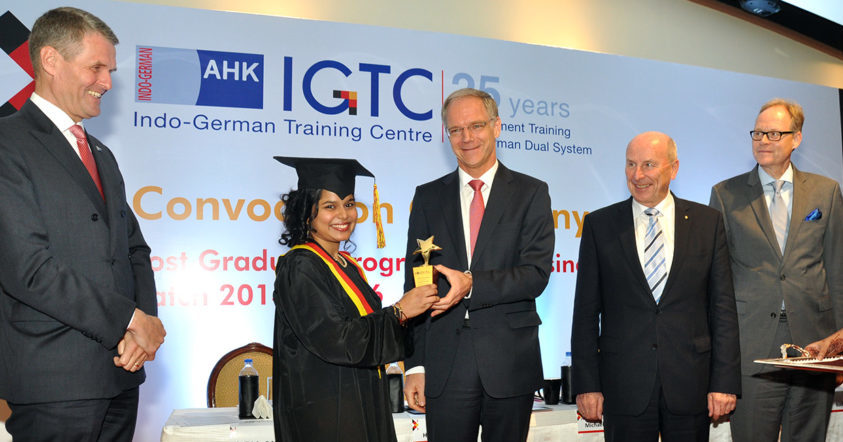 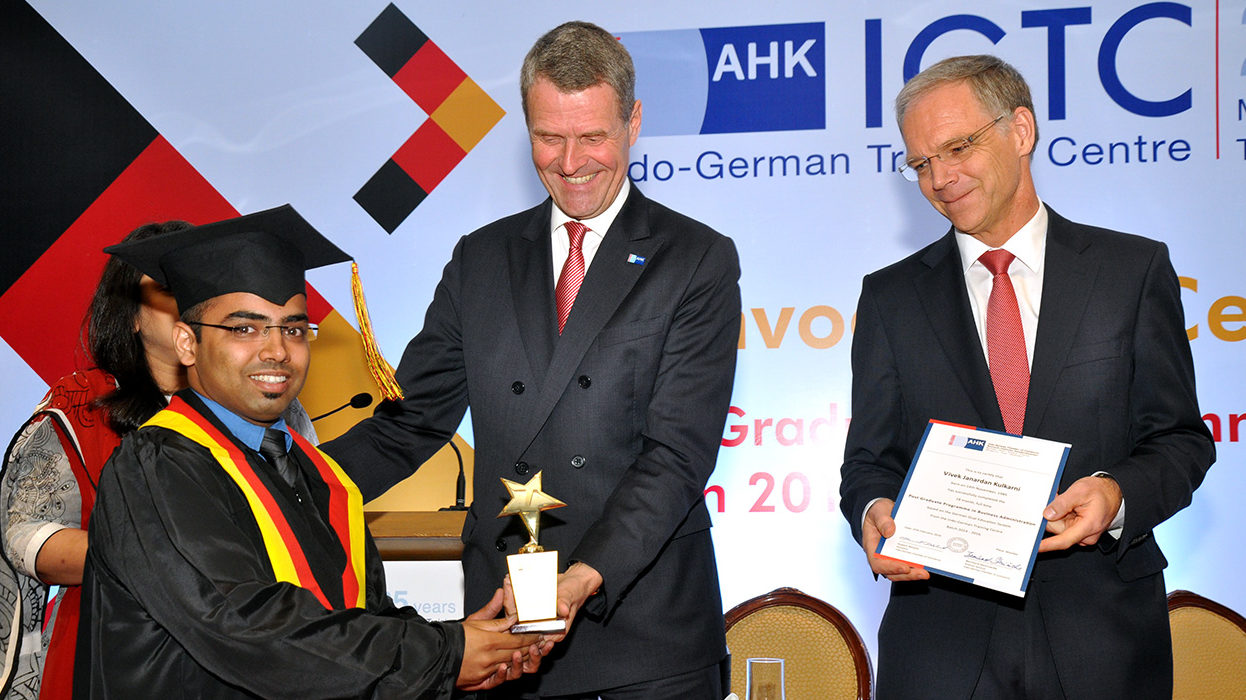 “Today is a celebration” with this opening statement, the President of the Indo-German Chamber of Commerce (IGCC) , Mr. Hubert Reilard welcomed everyone to the Indo-German Training Centre’s (IGTC) 23rd Convocation Ceremony  of Batch 2014-2016 in Graduate Programme in Business Administration (PGPBA) held on Thursday, 25th February 2016. And what a celebration it was for the 57 students who received their certificates for completing the 18 months course in the presence of their parents, dignitaries, representatives from the Indo-German business community,   IGTC faculty, IGTC Batch 2015-2017 and well-wishers.

The Opening Remarks by Mr. Bernhard Steinruecke, Director General, Indo-German Chamber of Commerce (IGCC) got the Convocation Ceremony started followed by Mr. Reilard, who besides calling it a celebration, also emphasized the importance of staying in a company for at least 2-3 years:“Don’t change jobs fast because your ideas will only come to fruit over time and you will only know of the results if you stick around. The results are the only thing in life that can tell you how good or bad your ideas are”.  He went on to say: “Realize that small companies play an important role in the German Economy as about 85% of domestic products in Germany come from small companies (SMEs). Even the Chamber President (referring to himself)today comes from a small German Company (he is the Managing Director, EFD Induction Limited). In conclusion he quoted the famous line “the best way to realize your dreams is to wake up”!

When Radhieka R Mehta, Director of IGTC called upon the next speaker, an IGTC faculty, to share his experience of being at IGTC, it was a sight to behold as 57 graduates gave a standing ovation to Professor Mankad also, popularly known as the Sachin Tendulkar of Economics. He literally wooed and moved the audience with his emotional speech to such an extent that everyone including the speakers became his attentive/mesmerized “students”!  He started out by stating that IGTC to him is like the tree in Gautam Buddha’s story which stood forever and IGTC would be the last institute he would give up as being part of such an institute has kept him a student! He went on to say that instead of using the “Convocation” for today’s ceremony, he would rather use the American terminology “Commencement” as “the rest of your life commences from today – stepping forward to a new journey”. He asked the students to internalize VUCA (Volatility, Uncertainty, Complexity and Ambiguity) in every sphere of their lives as “Success is keeping up with the world as it changes”. He concluded his speech, to a rousing round of applause and once again to a standing ovation from the students by quoting J K Rowling: “Don’t fear failure”

The next speaker, Mrs. Colleen D’souza, Deputy General Manager, Human Resources, Mercedes Benz spoke on behalf of IGTC’s Business Partners. In her speech she narrated how the “Tristar’s” association with IGTC came about: “Weat Mercedes-Benz India piloted our first IGTC internship program in the year 2014 with 2 Students.  First impressions do count! It is the business experience with these two that paved the way for the next batches of 4 interns in 2015 and 7 in 2016.  Internships apart, our corporate connect, has been enriched through the several IGTC alumni who are employed at our company  and 16 of our employees successfully completed the Executive Business Management Course (EBMP)  course in 2015 and another 15 will do so at the end of this year”. Her parting thoughts to the students were her 4 principle lessons through which she learns and gains wisdom: 1.Stay in realm of Learning, 2. Seize opportunity when it comes your way, 3. Stay rooted in Principles and Values and 4.Let your Light Shine.

The first Guest of Honour Mr. Michael Siebert, Consul General, German Consulate in Mumbai, championed the German Dual Education System and applauded the IGTC for doing such an incredible job in promoting and implementing this famed system for the last 25 years. For the students he had this to say: “The pioneers of this program are you students with Indo-German careers. You have all the keys to open new doors between the two countries. You have with you, all the necessary ingredients – in terms of people, businesses, culture and economies. You’re set on a path of opportunities both in India and perhaps Germany as well”.  He also thanked the corporates for their continuous support and cooperation without which this kind of education would not be possible.

Burkhard Thost, THOST Projektmanagement GmbH & President, IHK Nordschwarzwald (North Black Forest), the second Guest of Honour  commended the students on their achievements and looks forward to having them as future partners and key staff in the Indian branches of German organizations. He rounded up his speech by saying: “I believe it would be brilliant if our economies were to grow with the Indian Heart and the German Thinking”.

The Keynote address by Dr. Steffen Berns, Managing Director, Bosch Ltd. and President, Bosch Group India, gave valuable insights into the working culture of Bosch whose foundations are based on Ethics, Customer Focus and Employees. He credited the success of Bosch to the fact that all Boschlers (as Bosch employees are known) are trained across all possible fields of studies and in different forms leading to Life Long Learning. He also cautioned the students by saying: “Though you’ve been prepared and you are ready for the rest of your life, always be humble and prepared to be challenged. Never deviate from the path of ethics and values as money lost can be earned back but not reputation”.  His encouragement to the students was to work on their hobbies and give back to society in order to remain social beings instead of becoming dull. And also hone their freshly acquired skills as such leaders take responsibility for their actions and make changes happen as “success stories don’t just happen. They are made. And that – by people like you”.

“Mit einem indischem Herz und einem deutschen Gehirn, IGTC has practically made us half Germans by exposing us to every aspect of the German culture & its wonderful people” this was one of the many “learnings” the “real” stars/ VIPs of the day- the graduates shared while taking the dais. Three students on behalf of the class reminiscence about their 18 month journey and classmates and another two shared their experience as interns with Siemens and Häfele in a lively banter interspersed with witty dialogues about their fellow students, lecturers and IGTC life in general.  The specially created short film, documenting their journey drew lots of laughter, amusement and applause from the audience. As they left the dais they had these rather profound words to say: “As we carry the expectations of 25 years of a legacy, all we would like to say, “Be phenomenal or be forgotten”.
Before the concluding part of the ceremony, the Director of IGTC for the last time addressed the batch: “It has been wonderful that our paths crossed for the last 18 months, and we shared this journey together.  These memories have been imbibed in my heart forever, and I hope that the learnings and qualities remain ingrained on your soul.  Uphold the legacy of IGTC in every aspect of your professional and personal lives, love your life ahead and stay happy forever!”

The ceremony concluded with the distribution of certificates to the graduating batch and awarding ofAwards of Merit to certain students.

Bayer Scholarship Award: This award is also called Championing Success was conceptualized under the leadership of Mr. KS Harish, Country Group HR Head of Bayer and keenly implemented by the HR department.  Through a rigorous and exhaustive selection process, they identify some of the best talent at IGTC and reward them with a cash scholarship of Rs. 50000/-.  This year there were four recipients:  Tousif Chamanshaikh, Vipul Bajaj, Aishwarya Patwardhan and Urvil Matalia and Mr.VaibhavRane, Country Expert – Talent Attraction, Bayerhanded out the certificates and cheques.

BASF Award: Through a specially-designed curriculum for 24 hours, top management from BASF including the Chairman and Managing Director step into the shoes of being a faculty, into the IGTC classroom to engage the students into a course that sensitized them on the topic of Business Ethics and Corporate Governance. This initiative is now in its fourth year at IGTC and is indeed a very large commitment in terms of time and effort from the organization and the IGTC is greatly indebted to BASF for this deep involvement.  This year’s recipient was Ms. Shweta Deshpande and she received her award fromMr.  Raman Ramachandran, Chairman & Managing Director, BASF India. Before handing out the award Mr. Ramachandran reminded the students that in professional life, one’s ethics and values will be tested on a daily basis in a number of ways and the one thing that is not appointed by a majority vote is one’s conscience. He also asked them to think about how they would like to leave a legacy and why some people are talked about long after they have left a company : “This is not because of new technologies or new systems as much as it is because of their respective exemplary code of ethics”.

Dr. Günter Krüger Award of Excellence:  This is to recognize and award the Top Two at IGTC; the very best! Their success is a culmination of their academic grades at IGTC and practical training results.  And they are presented with the prestigious Dr. Guenter Krueger Award for Excellence from the Indo-German Chamber of Commerce.  This award gives the student an opportunity to study a language course with the Goethe-Institut in Germany and to understand best business practices in Germany through hands-on, practical training in his/her company.  The formal certificate will be given at the 60th AGM of the Indo-German Chamber of Commerce, but in the meantime they are awarded with a small trophy for their outstanding performance.  And after 10 years, a young lady, Ms. Tasanya D’limareceived this award along withMr. Vivek Kulkarni.