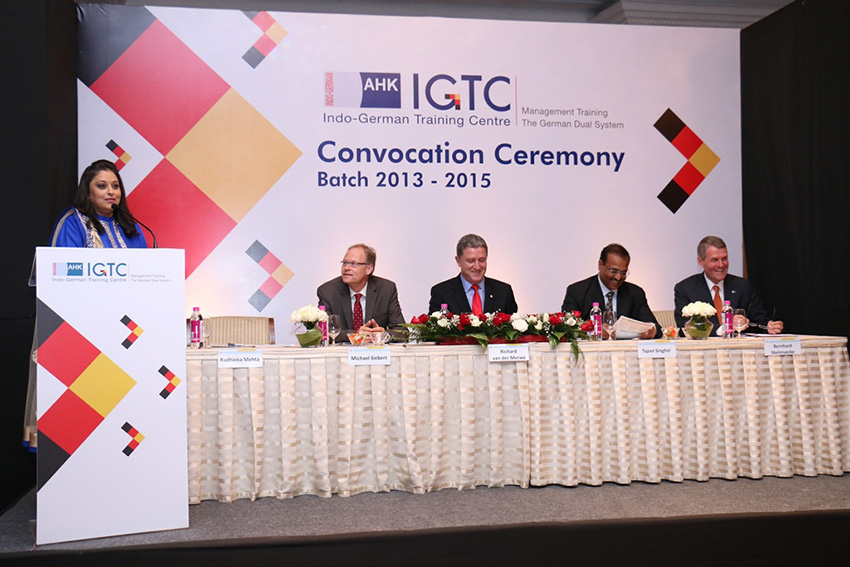 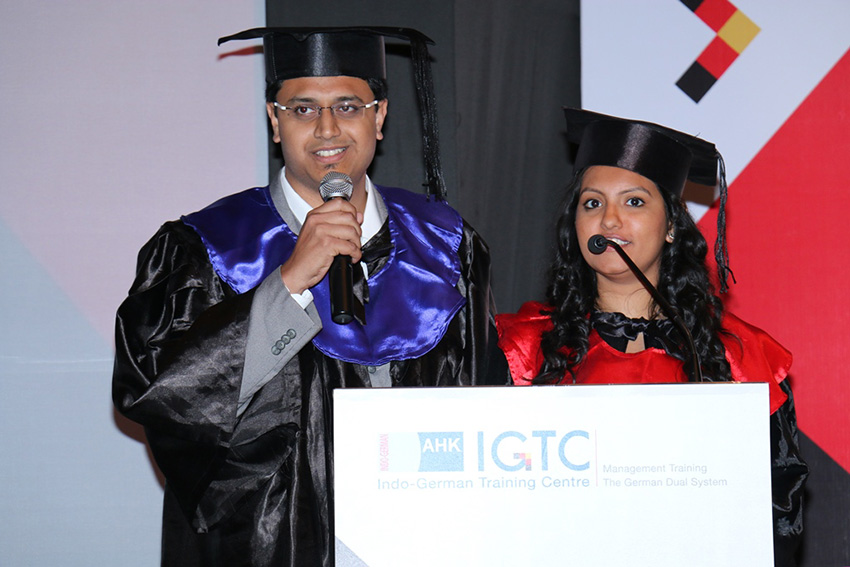 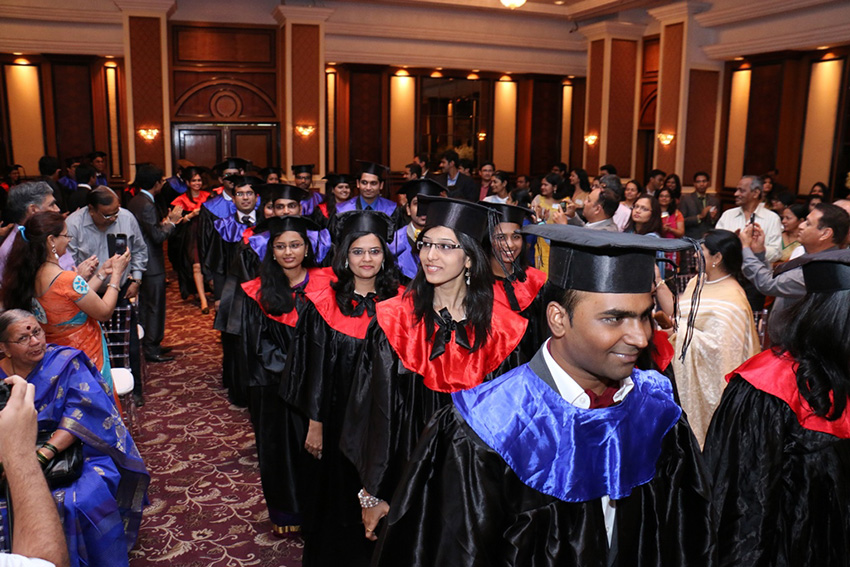 The audience give a standing ovation as the graduates walk in 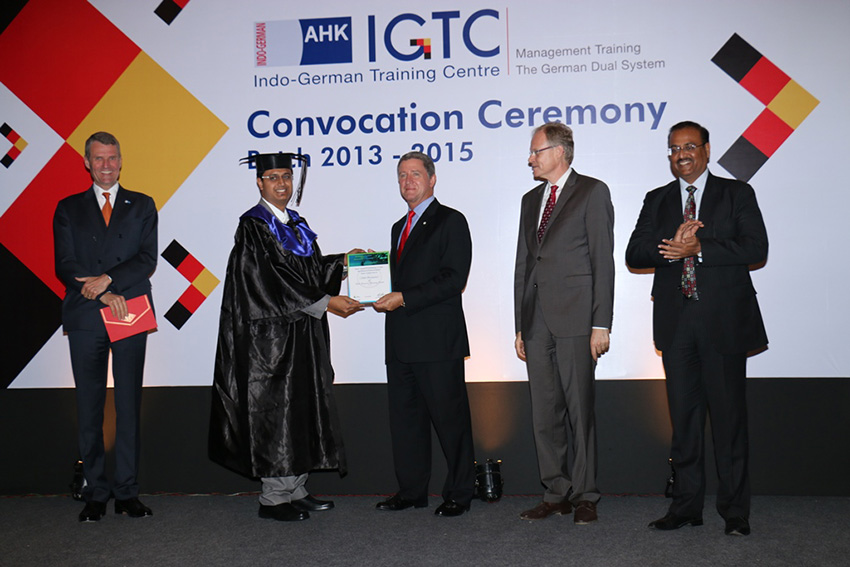 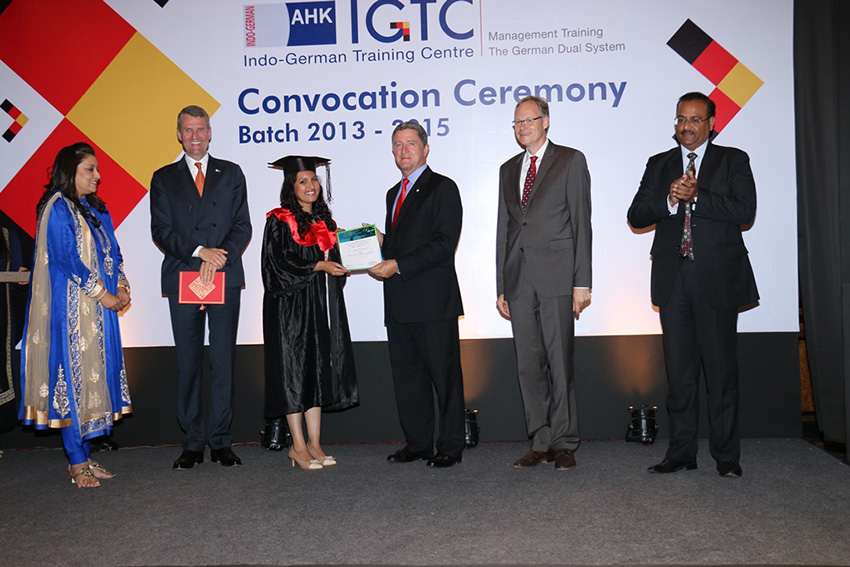 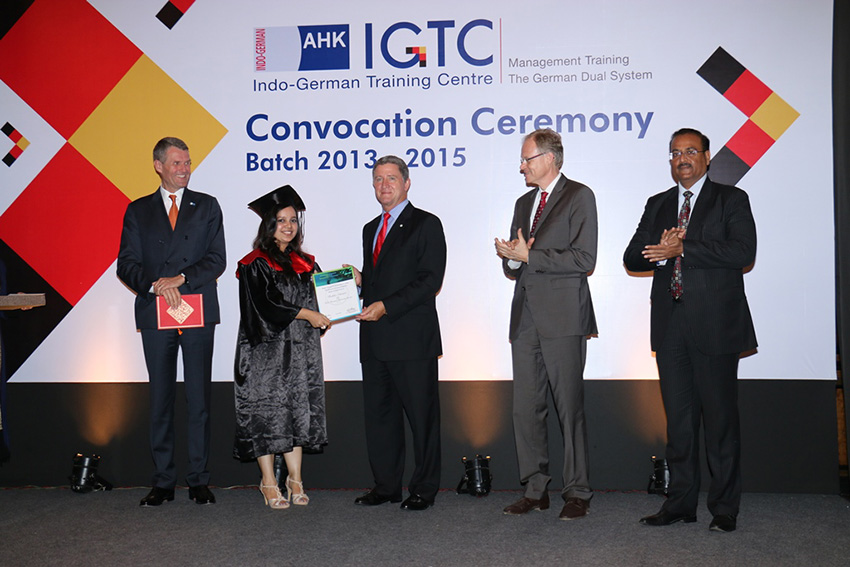 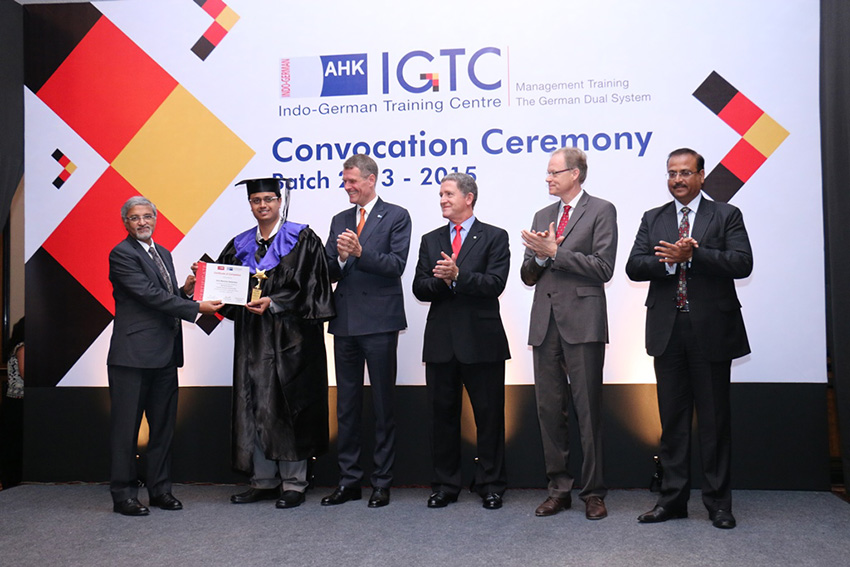 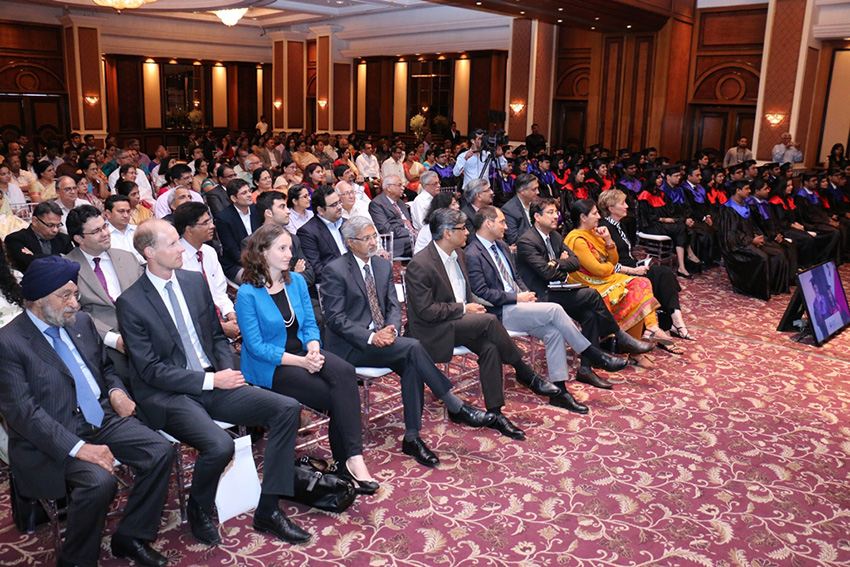 The audience enjoying the ceremony 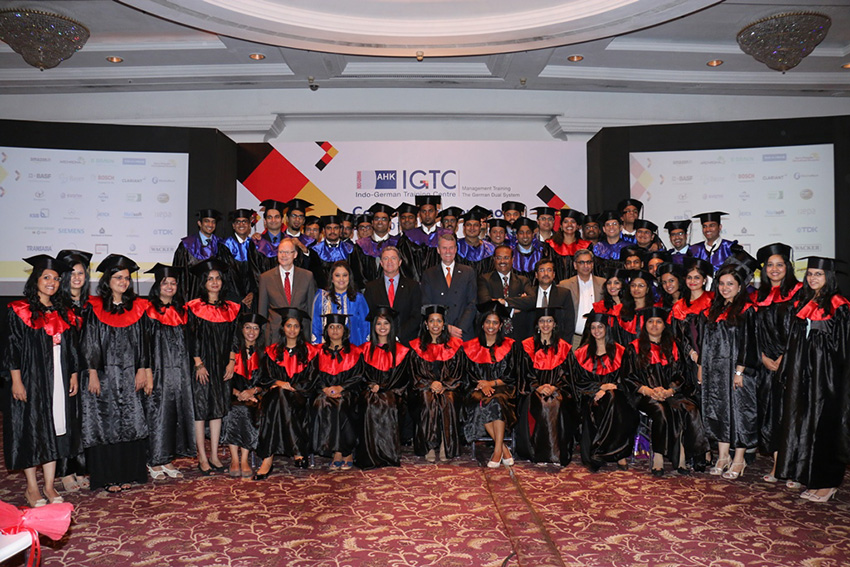 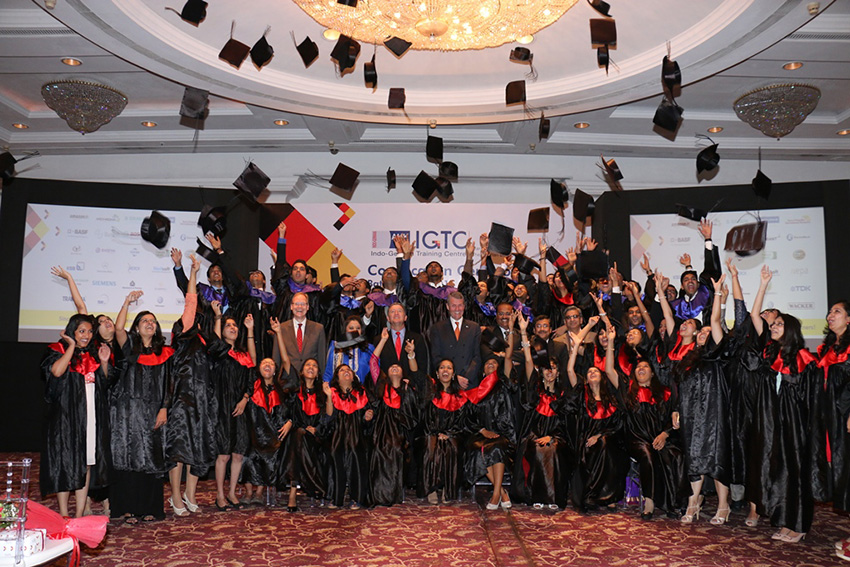 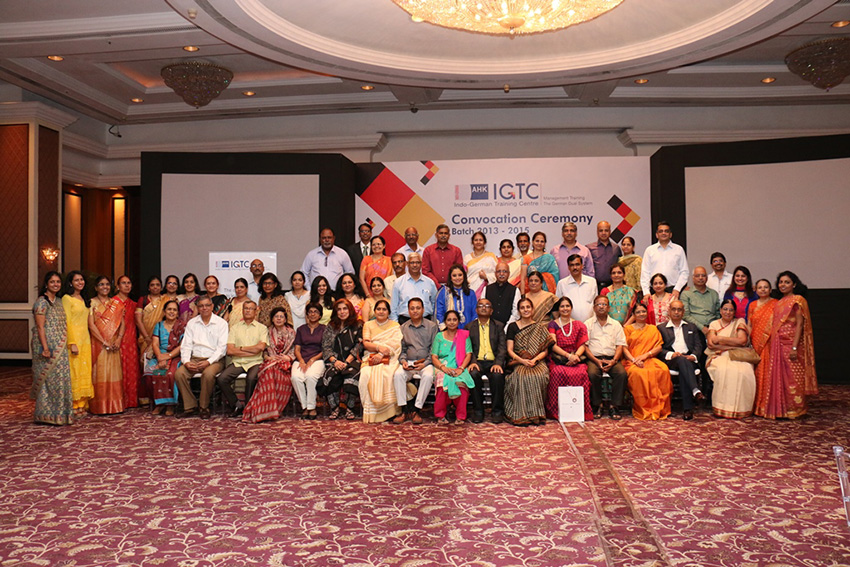 With the proud parents The Dr. Günter Krüger for Excellence presented to Rohit Pillai

On Monday, 2nd March 2015 marked an end to an eventful and exciting 18-month journey for 51 students and also at the same time marked a beginning of a world full of opportunities and experiences for these 51 Graduating Students of the Post Graduate Programme in Business Administration (PGPBA). The Taj Land Ends, Bandra played the perfect venue, filled with radiance and spirit of accomplishment complimented with the presence of proud parentsand distinguished guests from industry and academia to support and applaud the achievement of these bright sparks.

Mr. Bernhard Steinruecke, Director General, Indo-German Chamber of Commerce (IGCC) extended a warm welcome to the dignitaries on the dais. He started off on a humorous note by stating that we all are influenced deeply by German standards which shows as the event started perfectly on time as planned.  He enlightened the audience by saying that if one types Allianz on Google, the first thing that pops up is ‘skilling’ which is an important of tool education. He also appreciated the work done by Bajaj Allianz in the field of skilled training.

Mr. Tapan Singhel, President, IGCC and Managing Director and CEO, Bajaj Allianz General Insurance Company stood by the opinion on skilled training and stated that after these 18 months of theoretical learning at IGTC interspersed with practical training at an assigned German organization surely prepares the students for the industry. The German Dual System has time and again proved this by grooming students to be readily employable in the practical world.

Alok Badamikar and Neha Kuriakose, IGTC students addressed the audience with great vigor and confidence. They described IGTC as a school for unlearning, learning and relearning. They began their speech by defining some of the most commonly used concepts such as management, team work, friendship and love through their experiences at IGTC.  They explained that the course was always on a high note right from the induction week up to the submission of their capstone projects. They recalled how this 18-month journey was innovative, full of visions, warmth, relationship, belief, faith, rare and much more. The entire spirit of IGTC lies in the way everyone helps each other come what may. They ended their speech by thanking the IGTC management and dedicating a small visual of their cherished moments at the training centre.

He was of the view that Google today blocks learning as information seeking is extremely easy but what is important is the journey to find this information. He concluded by conveying to the young professionals that the world is waiting for them.

Mr. Santanu Ghoshal, Vice President, Human Resources, Schaeffler India believed in the fact that business education has evolved in India and is still evolving at a faster pace. Industry is compliance oriented and no deviations are entertained. He praised the IGTC’s course by saying that the three different training projects add strength to the students’ knowledge. He advised the students to learn aggressively, never fail to experiment and mainly never fail to fail. He ended his speech by saying that, ‘Price of not acting in a situation is much more than acting and failing.’

The Guest of Honour, Mr. Michael Siebert, Consul General, German Consulate General in Mumbai, lauded the students on their achievements and highlighted the importance of Indo-German careers in a student’s life. He threw light on the upcoming industrial fair at Hannover, Germany where India is the partner country and visualized India-Germany relations at a new high.

Chief Guest, Mr. Richard van der Merwe, Deputy Chairman and Managing Director, Bayer Group in India greeted the crowd with a warm “Namaste” and congratulated the students, their families and IGTC for their efforts and diligence. He strongly advocated that the students must protect their voice, their spirit, their values and their perseverance in the competitive corporate world and not be intimidated by others. He also reminded the student that now that they have graduated there is no room for excuses. He went on to advice the students to follow their hearts, to stop worrying, continue to learn every day, be creative and challenge the status quo. He ended on a lighter note saying, college days are wonderful but things will only get better from here and that this is not end but only a beginning.

The speeches were followed by the highly awaited certificate distribution ceremony. Breaking the trend of the previous years, the students of the Graduating Batch decided to talk of each and every fellow batch mate as they came up to collect their awards and certificates. Each student was also presented a customized crystal plaque as a souvenir from the IGTC along with their certificate. The Bayer Scholarships of Rs. 50,000/- each to three students was awarded to Alok Badamikar, Neha Kuriakose and Ruchika Natrajan. Dr. Raman Ramachandran, Chairman & Managing Director, BASF India Limited presented the award for the BASF Corporate Governance and Business Ethics Seminar Series to Alok Badamikar who also was the Bayer Scholarship recipient. Like every year, it was tough to decide the best performing student of the batch, hence for the first time IGTC Mumbai had two Dr. Günter Krüger Award for Excellence which were awarded to Rohit Pillai and Nisarg Shah.

Ms. Radhieka R Mehta, Director, Indo-German Training Centre proposed the Vote of Thanks to all the dignitaries, corporate guests and proud parents for their presence and support.She conveyed her sincere appreciation to the management of all participating companies, who have been training partners and final recruiters for the PGPBA Batch 2013 – 2015. Mr. Bernhard Steinruecke, Director General, IGCC gave gif

Finally, post a formal group photograph, now it was time for the fresh graduates to partake in the quintessential hat-toss ceremony, cheering each other and soaring their hats as high as their aspirations. Ms. Radhieka R Mehta, Director, IGTC left a last message for the young graduates, “Say goodbye to the comfortable and secure life within IGTC. Get ready to march to the beat of the business world! Raise a banner….. where a banner never flew.”