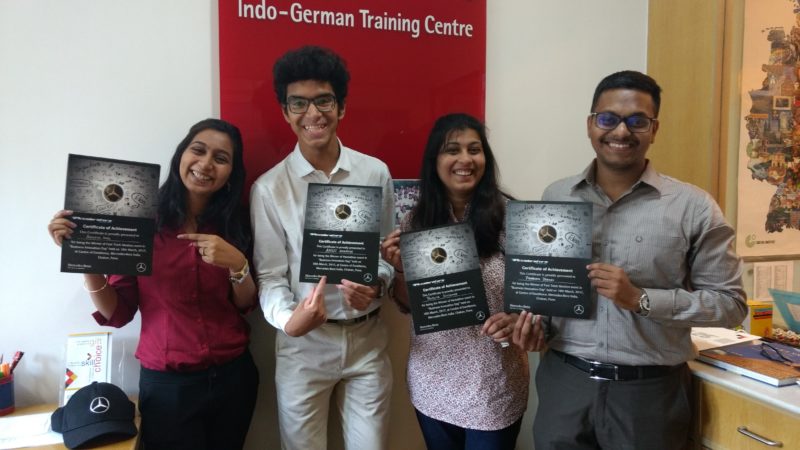 Winners from IGTC of the Hackathon and Fastrack Ideation 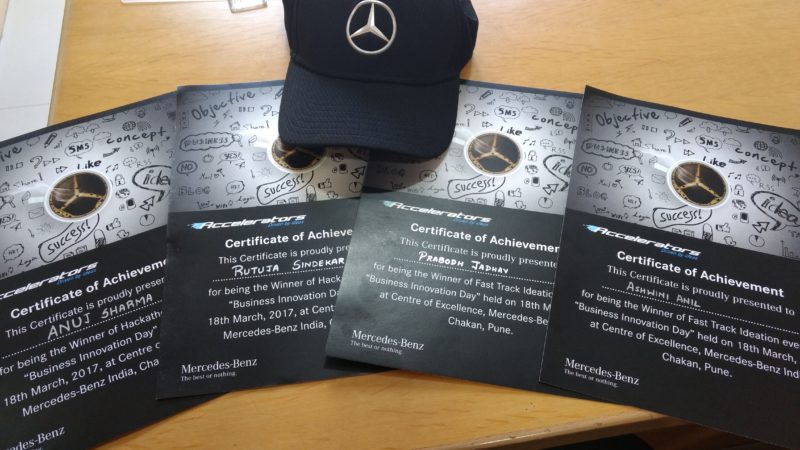 Mementos given to all those who participated in ‘Accelerator’

Accelerators – Driven by Ideas”, a Business Innovation (BI) Day was hosted by Mercedes Benz.  The objective is to brainstorm, foster and ideate a plethora of ideas which in turn will be evaluated via crowdfunding in a winner takes all initiative!

The questions asked were:

An online form was released, which had to be filled by the students of various MBA colleges in Mumbai and Pune where they asked individuals to express their innovative ideas for the automobile industry. Various institutions such as NMIMS, JBIMS, Symbiosis, K.J. Somaiya and Indo-German Training Centre (IGTC) participated in this event with a grand total of 500 entries being registered for the event. These 500 entries were screened and the top 100 entries were selected.

20 students from IGTC were invited to Centre of Excellence (COE) at the Mercedes Benz India headquarters on 18th March 2017.  All students were given a color code as they entered the Mercedes-Benz office, dividing them into groups of 10. The event commenced with a brief introduction to the Mercedes Benz brand followed by a lecture by Kaustabh Dhargalkar, Mentor, Centre of Innovation and Enterprise, IIM Ahmedabad.

Round 1 was a team activity called ‘Spark Plug’ where individual teams were given 20 minutes to innovate a model. It was picturized to resemble the reality show ‘Shark Tank’, where teams pitched their ideas to venture capitalists. The ‘Sharks’ were Sanjeev Mandpe, General Manager, Sales, Planning and Operations; Tushar Wankavar, General Manager, Sales and Kaustabh Dhargalkar. The winning team of this stage gained an advantage, where they were given preference to choose their topic for Round 2 ‘Hackathon’ and the order in which teams would present.  2 members from each team were nominated to present their ideas. Once the idea was pitched to the Sharks, crowdfunding started where every student was given a note and had to drop the note in the box of the team whose idea they thought best.

After lunch Mr. Kaustubh Dhargalkar delivered a lecture, where he gave great insights into how innovations can be superimposed from different fields. To beat the post-lunch lethargy, a game Paper-Stone-Scissors was played.

The final Round 3 was ‘Fastrack Ideation’, wherein teams had to brainstorm and come up with as many ideas as they could regarding any industry and department in a span of 2 hours. The Sharks were simultaneously calling on students whose ideas were pulled up and that student had 30 seconds to explain how their idea was worth looking into. A total of 230 ideas were collected from all the teams and 150 were screened by the Sharks.  25 of these were shortlisted and not surprisingly, 7 were from IGTC students.

Memories of the day will be treasured, as each student left with a certificate, a photograph to remind them of this day and the learning ‘To never stop dreaming and keep innovating, for the world is our playground!’