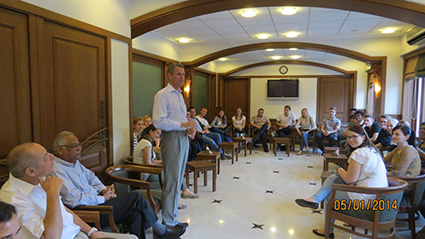 Mr. Steinruecke addresses the DHBW Delegation on their first day at the Malabar Hill Club 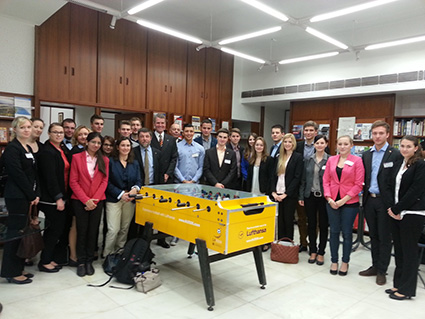 Inaugural of the programme at the IGCC Office 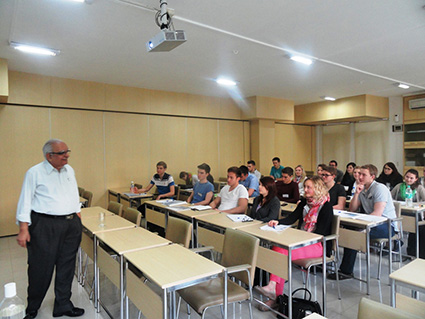 Dr. Mankad interacts with the German students during his session 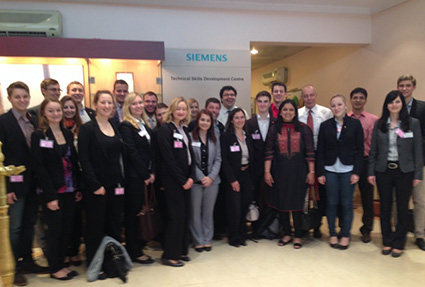 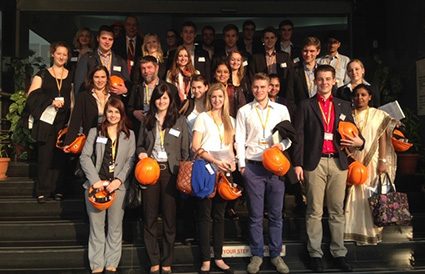 Students visit the BASF Lab at the BASF Plant in Turbhe 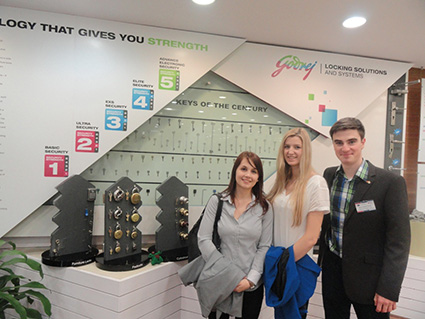 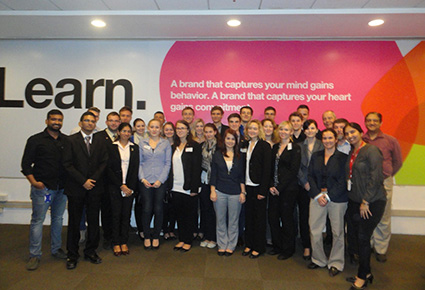 Students had a unique experience during the Tech Mahindra visit 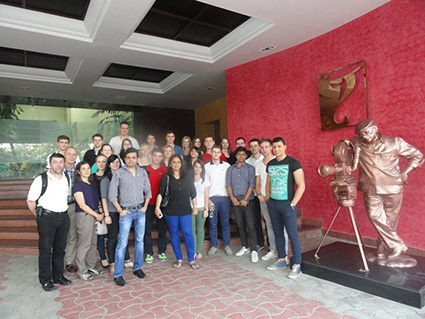 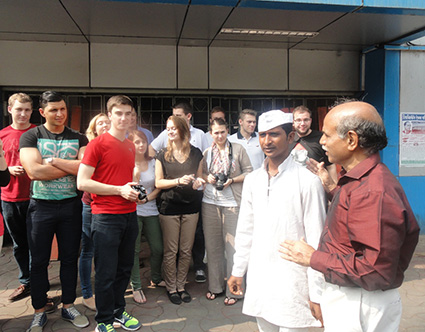 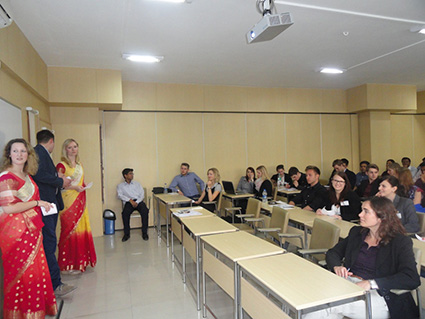 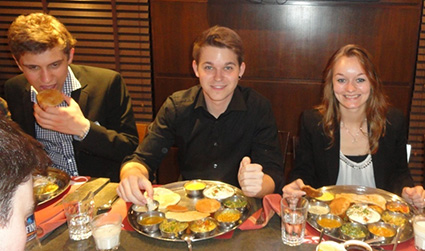 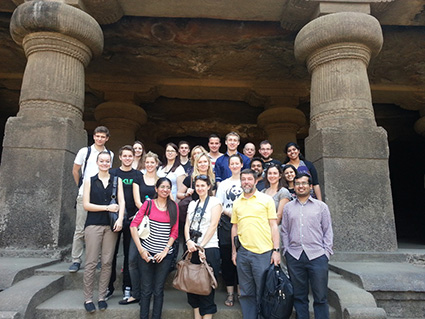 A short excursion to the Elephanta Caves Students bid farewell at a Sundowner in the Hotel Intercontinental

The year 2014 began with the Indo-German Training Centre welcoming the second group of students from the Duale Hochschule Baden- WÃ¼rttemberg (DHBW), Karlsruhe for their well-established Intenstive Study Programme “Business Environment India” from 6th – 15th January 2014.  The essence of this student exchange programme was to bring the countries closer, to know people from both sides, to gain from diverse experiences, to build friendships that transcend the boundaries of distance and time and to create fond memories to savour.

The delegation was hosted by Ms. Radhieka Mehta, Director IGTC and led by Prof. Volker Ihle, Head of Department, Business Administration and Engineering, and International Coordinator, DHBW and Prof. Dr. Ruediger Schaefer, Head of Department, Management in Commerce, DHBW.  They were also accompanied by Ms. Ramona Lange, Representative IHK Karlsruhe.  Mr. Bernhard Steinruecke, Director General, IGCC formally inaugurated the programme and gave them insights on economic ties between India and Germany. Their 10-day itinerary was meticulously planned with a host of interesting lectures at IGTC, industry visits to Indian and German organizations and cultural immersion with the Indian students.

The industry visits started off by observing how German organizations such as Siemens and BASF function in India.  It was interesting for the students to know that several processes in India are done manually as they tend to be cost effective.  They were impressed by the fact that German companies invest in the education of young people as well as work towards renewable energy to ensure a good life for future generations.

Among the Indian companies, the German students visited large conglomerates such as Godrej Industries, Godrej and Boyce, Mahindra and Mahindra, Tech Mahindra, Lodha Group, and ACC Limited.  At Godrej, students learnt about the HR policies such as staff welfare and organizational structure. They visited the Innovation Centre as well as the Company Showroom with the entire product display.  At Mahindra and Mahindra plant, they gained an overview of an Indian automotive plant with emphasis on the manufacturing process, implementation of quality circles and the design strategy.  Tech Mahindra was a complete contrast to the previous two plants.  It was a completely unique experience to see people who work in the advanced 3G technology space and provide end-to-end CRM solutions for the people in the UK, Ireland and Australia. It was an interesting fact that they have a pool of 12000 professionals who attend to almost 30,000 calls per day witha commitment to putting the customer first. The students were impressed to get the actual feel of the shop floor where calls were made to offer solutions and simplify the life of the customer.

At the upcoming, luxurious, residential project “The Park” of the Lodha Group, the students gained a first-hand experience of seeing Indian labourers working on a construction site. This was followed by a visit to the legendary ACC Cement House, which is an energy-efficient, environment-friendly building. Its attractive refurbished faÃ§ade now houses an ultramodern office equipped with space-saving modular workstations, access control and intelligent lighting with motion and light sensors, waste management systems and water saving devices set amid greenery. Beyond Indian corporate giants, the students also visited Infinium Precious Resources Ltd., which manufactures gold and silver coins ranging from 1 gm to 100 gm.

Work and studies were adequately combined with culture, fun and entertainment.  It is beyond doubt that Mumbai and Bollywood have always been synonymous.  Hence, a visit to the city would been incomplete without seeingthe state-of-the-art, fully integrated Yash Raj Films Studio. The students were thrilled to see the locations that bring stories to life; to take a close look at the most advancedsound studio and actuallylisten to a song recording; and post-production facilities.  It was wonderful to see two Hindi film trailers with English subtitles, and walk out to personally meet the stars, Ranveer Singh and Arjun Kapoor.  That’s why they say that dreams come true in Bollywood!!

Dharavi and Elephanta were two must-dos in the city.  At Dharavi, the students were amazed to see the heart of the small-scale industry in India. It came as a big surprise how the workshops in slums were equipped with machinery for mass-production.  The slum tour – including the tanning of leather, the recycling of plastic containers, the making of garments and the papad making process – was indeed inspiring and dispelled all notions of Dharavi being a place of misery.  The students had a delightful time on their short excursion to the Elephanta Caves, an UNESCO World Heritage Site.  They enjoyed the boat journey, the mad rush for the toy train, the infinite stairs with little handicraft shops all along and the beautifully carved Shiva temple.

All these impressions over ten days culminated into final presentations at IGTC.  Along with a sunset over the Arabian Sea, the students bid farewell to IGTC – their home in India – with a promise to return someday, sometime! Auf Wiedersehen!! 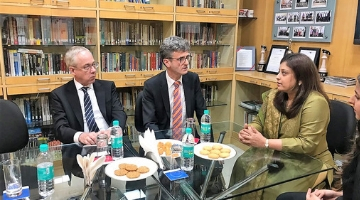